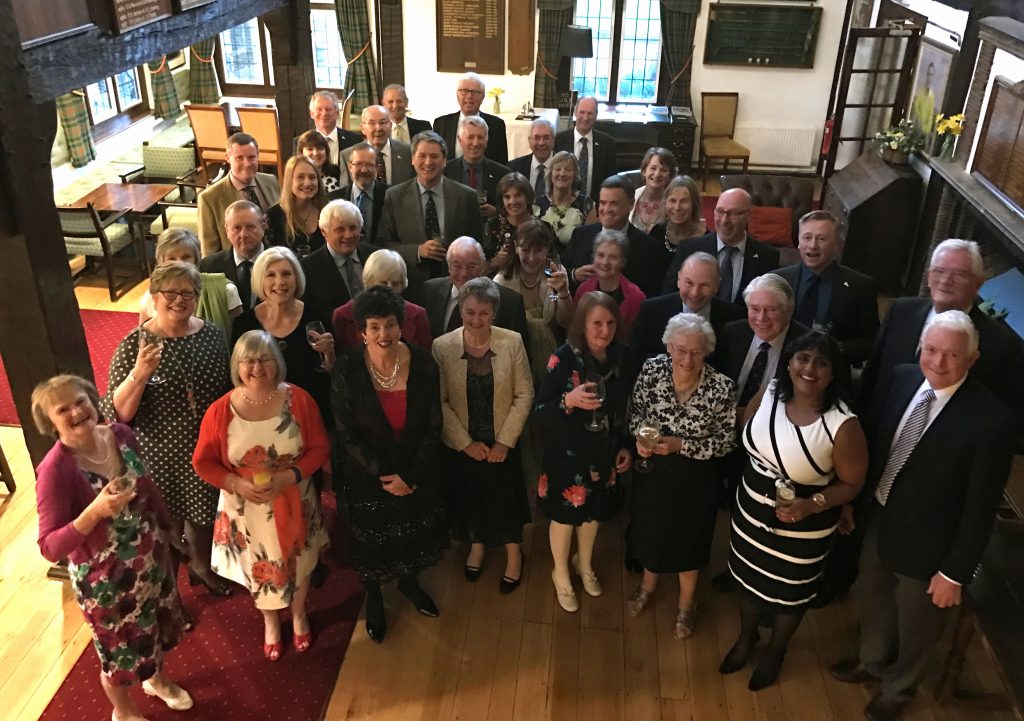 This years Annual Dinner took place at Tandridge Golf Club (with grateful thanks to Bob Perry) on Saturday 1 April and was attended by 40 members and guests. A great time was had by all and many thanks go to Richard and Sharon for all their hard work in putting the evening together.

Tandridge Golf Club’s chef laid on a delicious four course meal which was enjoyed with a glass of Prosecco (courtesay of the Commodore) and more than a few bottles of fine wine! After dinner Richard introduced Graham Smith, our speaker for the evening, who told us about his many experiences as a Customs Officer and some of the many books he has written on maritime history. A huge thank you to Graham for sharing his fascinating stories with us.

The Round the Island Race trophy went again to John Rutherford on Degree of Latitude who finished 515 overall out of 994 finishers in the 2016 race. Richard noted that his time was 08:33:25 and compared it to John’s time the previous year of 08:30:37, pointing out that John was consistent if nothing else, completing both races within a time difference of less than 3 minutes!

The Allternative Round the Island Race trophy wasn’t presented this year as no race had taken place.

Jane Fowler was the truly worthy recipient of the Spirit of Sailing trophy for her adventurous cruise of the Baltics in 2016. Richard recalled how Oxted Offshore member Robert Fellowes, who sadly passed away two years ago, spent many months over many years sailing around these waters and mused that Robert would have been extremely proud of what Jane achieved.

The Rose Bowl Trophy was not awarded as no “fast cruises” had taken place due to atrocious weather conditions every time the club tried to set sail in unison! Another unawarded trophy was The Pugh Cup. This award was first presented in 2015 and is for “enduring heavy weather”.

Finally the Nigel Kitchen Trophy was presented to Jeremy Taylor. This award is for a member of the club who has “made a substantial contribution to the club other than pulling ropes and winding winches”! Richard acknowledged the effort that Jeremy had put in updating and maintaining the Oxted Offshore website over past years.

Richard then reflected on his term as Commodore, with all the high and lows that come with the office! He mused that Sharon would be pleased to have his attention again on Sunday evenings, times when he had spent many hours composing updates to circulate to the members! Jasper handed Richard the Past Commodore’s Pennant with it’s black cross, and Richard handed the Commodore’s Pennant to JT (John Taylor) and wished him good luck in the role.

JT spoke briefly, outlining his plans for the next two years. His focus will be on attracting new members, including boat owners, to the Club. He highlighted a few of the events that have been pencilled into the Calendar for the rest of 2017, including land visits to the Maritime Rescue Co-ordination Centre in Dover and the RNLI in Poole. He also gave a teaser of a new format for the Autumn Rally with the dubious title of “Points Make Prizes”!

He announced that the website and Facebook page are being “opened up” in order to reach more local people. Club Nights are being moved to a new date (the last Wednesday of each month) and a new venue (The Royal British Legion in Limpsfield). This will make it possible to add a new dimension to Club Nights from time to time.

The evening closed with a rousing ditty penned by master orator Jasper which told the sad tale of poor Nell and her ordeal at the hands of a drunken smuggler. Many thanks to Jasper for ending the night on such a high note!

One final thought for the evening. How did the new Commodore arrive home with Belinda’s handbag while Belinda arrived home with the Commodore’s phone? Answers on a postcard, or in the comment box below. Correct solutions will be rewarded with an Easter Bunny at the next Club Night!