Andy Giles and Jane Paulson have embarked on their long-awaited ‘Slow Boat to the Med’ big adventure with their Bavaria 33 Cruiser ‘Stiletto’. They crossed the Channel on 15 April 2017 and their final destination is the island of Ikaria in the Eastern Aegean – Andy’s roots.

We’ll be updating this page soon. In the meantime jump to their blog for the latest news! www.sailblogs.com/member/stiletto

We were not sorry to leave Saint Quay. It was only 12 miles to Paimpol, in a straight line but there was no wind. So we motored sailed. Paimpol has a lock and we needed to be in by 1.30 at the very latest as the whole of the approach dries out. So because of this time constraint we decided not to play around with the cruising chute. Just as well as a couple of hours after our arrival what we saw shocked both of us. The photo will explain all. 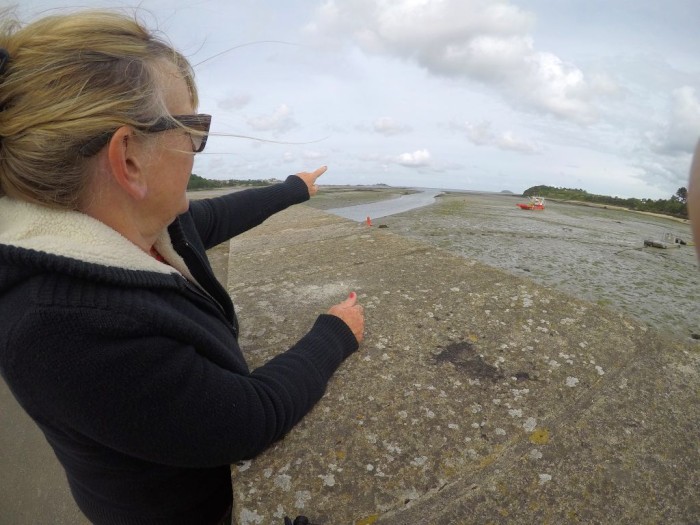 Looking back at the channel into Paimpol at low tide!

The approach in was quite challenging. Lots of rocks and although we were on the entrance channel leading line, we couldn’t see any channel markers and at one point I was convinced we were going to beach Stiletto. Almost at the last minute a red post appeared and we turned sharp right to pick up the red and green markers showing us the way in.

I called up the lock master who said the gates were opening and in we went. No hanging about. I had fendered up Stiletto both sides and had ropes at the ready but didn’t need any (ropes) as from the top of the quay down the wall to the lock floor are fixed ropes that you literally hold onto while the level changes. Easy peasy. We went into Basin No.2 where the harbour master greeted us by pointing to a visitors berth at the bottom of the ramp that led to his office and the loos and showers. Perfect.

Paimpol grew up around the deep-water Icelandic and Newfoundland cod industry. Until 1935, topsail schooners and ketches put out to sea from here in spring to spend the summer line-fishing in the sub-Artic. They returned in Autumn with holds full of salt fish . Today it is a small port, busy in a quiet sort of way, with a small marina and a picturesque water front. We had a wander around and liked what we saw.

The marina at Paimpol

The next day was going to be horrid with rain all day so we hit the local Carrefour (I left my shopping trolley by the check out) and bought some essentials, found the boulangerie for pastries and a French stick and the boucherie for fresh meat. I get so fed up with packaged meat and it was so nice to have the butcher cut off two beautiful pork chops from a joint and mince some beef fresh for us. We also bought some “interesting” looking sausages. All then wrapped in paper which meant I wasn’t filling my small rubbish bin with copious amounts of plastic packaging when I got back aboard.

The weather forecast was absolutely spot on and the next day it rained all day long, so we just hunkered down and caught up with emails, updated my blog and read. All of this made possible by the best WiFi signal ever. Yeeeha!!. The rain finally stopped so next morning we did a walking tour of the town, did some people watching over a coffee and at last, after lots of discussion and searching, Andreas found the ideal sized crab/lobster pot in the local chandlery and bought it. It fits perfectly on the transom and he is a very happy chappy. Now all we need is the perfect spot to drop it and hopefully catch a meal. We leave tomorrow for the River Trieux. 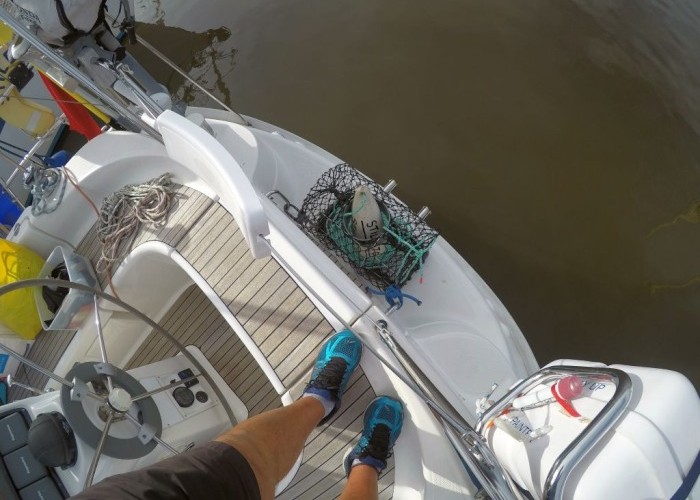 Follow Jane and Andy’s adventure on their blog page: www.sailblogs.com/member/stiletto