The Oxted Offshore Annual Dinner 2018 was held at Tandridge Golf Club (with grateful thanks to Bob Perry) on Saturday 24 March. 40 members and guests attended and a great time was had by all. 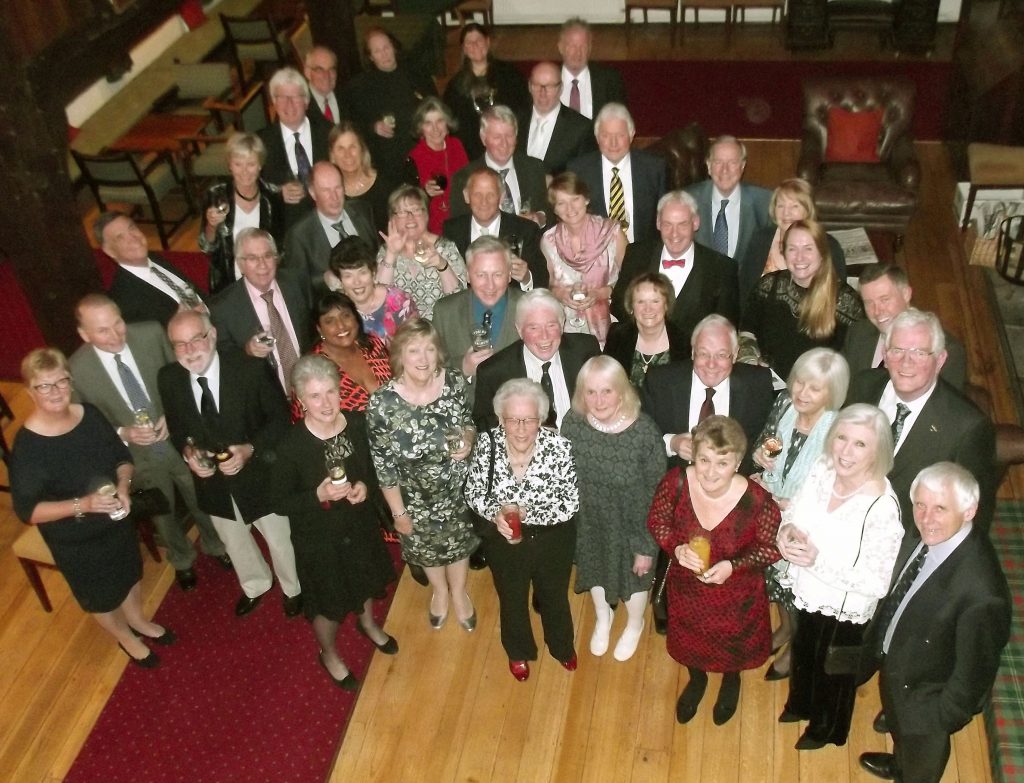 Tandridge Golf Club’s chef laid on a delicious meal which included roast beef, Yorkshire pudding and all the trimmings. After dinner JT reviewed the previous year and various events that had taken place. He then outlined sailing and social events planned for the coming year, with one or two interesting highlights including a Man Overboard for Real day in the Solent in conjunction with the RNLI and Yachting Monthly.

The Spirit of Sailing award went to Gail Leaver for her Round Britain adventure with Nick on Nick Nack. Despite 37 days of non-stop driving rain, high winds and near zero visibility in the Western Isles of Scotland, and struggling all the time to keep warm and dry, Gail resisted the temptation to abandon ship! When Nick Nack was laid up in Troon for the winter Gail returned to home comforts “still married and still talking to Nick”. Gail’s tenacity embodied the true spirit of this award.

The Round the Island plaque was awarded the Jasper Dale, the only Oxted Offshore member to skipper in last year’s race. Easy Tiger finished 199th overall – an outstanding achievement – and earned Jasper the IRCRS Bavaria Owners Association cup. Well done to Jasper!

Although no Alternative Round the Island Race took place, the trophy was awarded to Paul May who helped to crew Lutine in the RTI to the fastest win of any Lutine. The crew were also awarded the Haven Knox Johnston Cup by Lloyds Yacht Club. Their mind-boggling time of 6 hours 41 mins was handicap corrected to 8 hours 4 mins and they finished 227th overall.

The Rose Bowl, presented to the winner of any race taking place during a Rally, went to Nick and Gail Leaver on Nick Nack for the race to Poole during the Spring Rally. Whilst the other 3 competing yachts battled with fickle winds across Christchurch Bay, Nick Nack played a brilliant tactical race by taking the northern passage at Hurst Castle and crossing the finishing line a resounding 30 minutes ahead of the pack.

The Nigel Kitchen Memorial Trophy was awarded to Fran Taylor for her work over the last year in updating the club’s website, introducing a new-look monthly newsletter, and promoting the club through social media to attract new members.

There were a few contenders for the Pugh Trophy, awarded for endurance in heavy weather, but really only one clear winner! At the risk of filling their mantlepiece with Oxted Offshore trophies, the award went to Nick and Gail who battled with driving gale force winds, heavy seas and relentless rain for 37 days during their Round Britain adventure.

Finally JT announced a new trophy for the club. The Endeavour Award will recognise any attempt – be it a small step or a once-in-a-lifetime challenge – to reach a specific sailing goal. The award is dedicated to the memory of Robert Fellowes who was inspirational in his sailing endeavours.

That part of the evening closed with a poem orated by Jasper but, rather unqiuely, penned in part by various club members during the Christmas Lunch at the Island Sailing Club in Cowes!

There was plenty of time for catching up and making plans over coffee in the lounge after dinner. Towards the end of the evening the answers to the night’s quiz – loosely based on the theme of lighthouses – were shared and prizes awarded.